Improving team performance at scale – A short guideGet the eBook

A majority of people get less feedback than they would like. Almost no one likes giving feedback, especially unprompted. Asking for feedback and advice makes feedback discussions less stressful for both the recipient and provider. When done regularly, asking for feedback will change organisational culture for better.

We have a chronic feedback shortage

Research on feedback agrees that the majority of people are not satisfied with the feedback they receive. Not only is there a shortage in the amount and frequency of feedback, but also with quality, relevance, focus and delivery.

Here are some of the results we’ve found:

We see that there are two main reasons for this feedback shortage:

Almost no one wants to give others feedback

A 2014 article in Harvard Business Review showed that people want both reinforcing and redirecting feedback, but simultaneously dread giving it. Redirection in particular has a huge disparity: almost everyone wants redirecting feedback – even more than they want reinforcement – but very few are willing provide it.

Another interesting finding here was that people reported being neutral towards giving positive reinforcement, despite wanting it themselves.

So there seems to be a large gap between how much people want feedback, how much they get it, and how much they're willing to give it. There is clearly something wrong with the way most companies approach feedback. 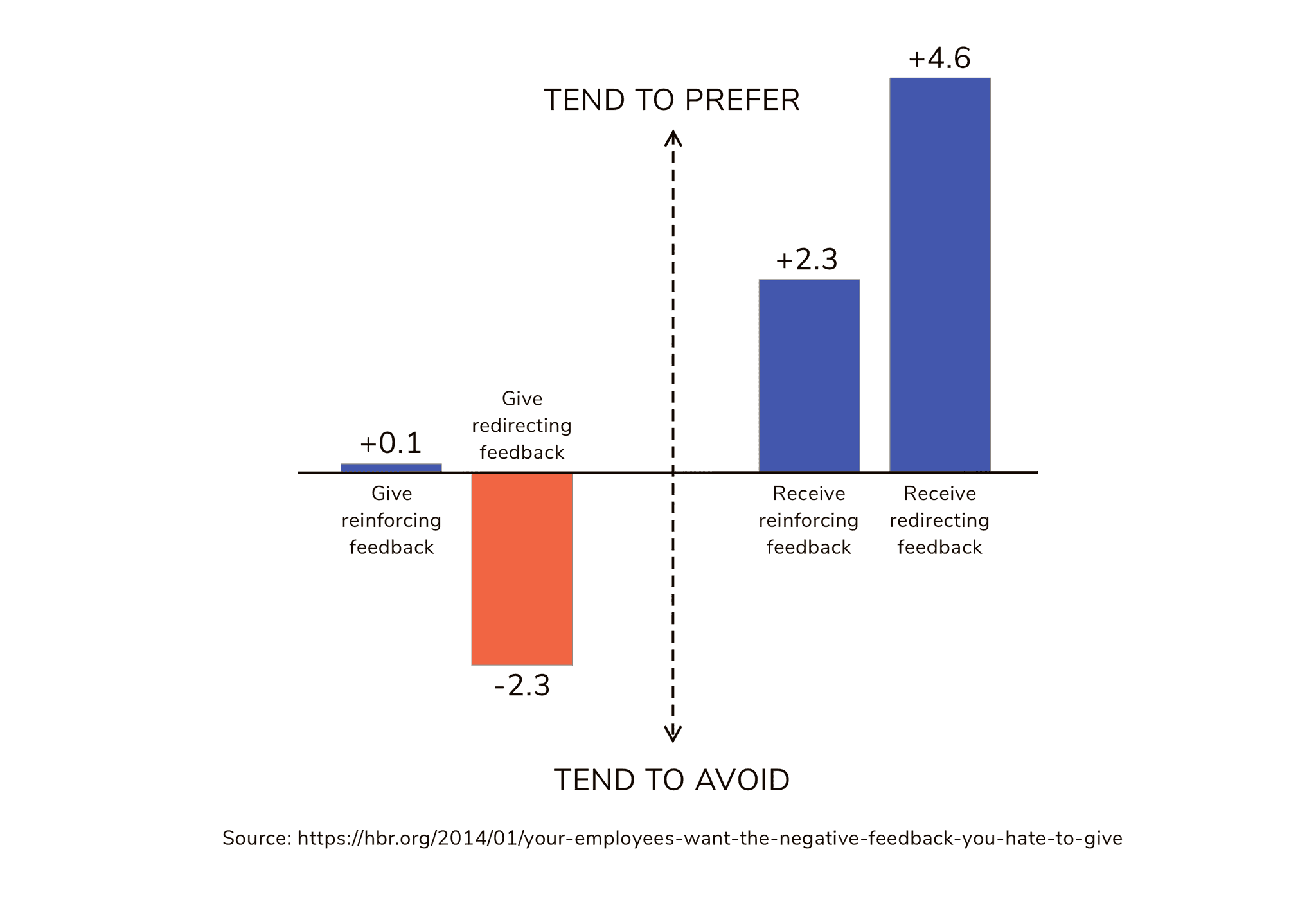 Graph and data adapted from a 2014 Harvard Business Review article.

In traditional organizations, managers give feedback to their team members in occasional 1-on-1 meetings. In a hierachical structure, at least some feedback is given every now and then, although the quality of it depends heavily on one person's skills and bias.

However, self-managing teams are becoming increasingly popular. This means that more and more people have no direct manager to give them regular feedback. Combining this notion with the fact that very few people want to give feedback, you’ll soon realize that the feedback shortage will likely be even worse in self-managing organisations: not even the manager is there to give people regular feedback.

Before getting to the solution, let’s review some of the main reasons why people avoid giving feedback.

In our own survey, the top 3 reasons for people not giving feedback were:

Other reasons for not giving feedback were: not wanting to upset others by being critical; fear of a defensive or aggressive reaction; trouble in delivering or formulating the feedback; and thinking “it’s only me who feels this way so my feedback doesn’t matter”.

A common theme here is that feedback causes stress for both receiver and provider.

A study found that people are equally stressed when they give and receive unprompted feedback. This was found by measuring the heart rates and reported anxiety of participants in a simulated feedback discussion. The main finding was that for both the recipient and provider of feedback, stress markers dropped significantly when a person asked for feedback, giving consent to the feedback provider to say what they think. Asking for feedback made it easier to give and receive feedback. This sounds promising, right?

The feedback shortage has a simple solution: make it a habit in your organization to ask for feedback. Do it frequently and be an example to others. Say aloud that you want to improve your work, and trust others to provide you with their best advice. Encourage others to do the same and say you will be happy to give some feedback and advice if they want it. This way you will contribute to building a healthy feedback culture.

You can use a digital tool like Teamspective to solicit feedback, or you can simply write your own feedback requests and send them via email or another communications app. In addition to written feedback, we encourage asking for feedback verbally, for example after meetings, negotiations or presentations.

Simple as this may sound, it requires a change in your mindset and organisational culture. People are reluctant to give feedback even if they have something to say. Giving them your permission to speak their mind, and being specific about the topics will go a long way in getting our need for feedback satisfied. Asking for feedback makes you look trustworthy, humble and striving, given that you won’t judge any feedback you receive, no matter how poorly it may be formulated.

So who should you go to when you want feedback? Managers sure, but that is only one side of the story. Get your teammates and other collaborators on board, and give them a permission to give you feedback. Approach your customers too, and make it easy for them to give you feedback. Following your customers’ advice will certainly be good for business and your relationship. We’ve learned that 4-6 people closest to you is the sweet spot for a quarterly feedback check-in, but feel free to do it your way.